Barnes Partnership Celebrated on a Landmark Day at SJU

After nearly a century as neighbors, Saint Joseph’s University and the Barnes Foundation celebrated their partnership today on the grounds of the Barnes Arboretum with about 200 guests.

After nearly a century as neighbors, Saint Joseph’s University and the Barnes Foundation celebrated their partnership today on the grounds of the Barnes Arboretum with about 200 guests.

The relationship, which was signed last November, is an idea whose time has come, said Barnes Foundation executive director and president Thom Collins.

“It’s a little-known-fact that Dr. Albert C. Barnes had contemplated partnering with a university in support of the horticulture education program that his wife, Laura, founded here in 1940,” Collins said. “It’s taken 80 years to make it happen, but here we are!

“SJU is the ideal partner to strengthen the horticulture program and ensure the long-term growth of the Barnes Arboretum.”

“This partnership is easily one of the most exciting endeavors I have been a part of since I arrived at St. Joe’s,” University President Mark C. Reed, Ed.D., told a crowd of about 200 on a beautiful early-fall day. “The opportunity to partner with a world-class institution to further the arts and sciences in ways that engage students and the community is really everything that we are about as a Jesuit institution of higher education.”

The University also announced that the gallery building, which hosted Albert Barnes’ renowned collection of art from visionaries including Seurat, Cézanne, Picasso and Van Gogh, will now be named the Frances M. Maguire Museum, in gratitude for the longtime support of SJU by Frances and her husband James J. Maguire ’58, and in honor of her lifelong love and cultivation of the arts. It will house works from the University’s collection, Dr. Reed said.

The busy day highlighted the depth of the University’s relationships with its neighbors. Earlier, Saint Joseph’s celebrated its educational partnership with Samuel Gompers Elementary School. Philadelphia Mayor Jim Kenney joined Dr. Reed and representatives from Gompers, SJU and the Mayor’s Office of Education at the pep rally.

The University capped the day by commemorating Pope Francis’ September 27, 2015 visit to campus, during which the pontiff blessed “Synagoga and Ecclesia in Our Time,” an original sculpture celebrating the special relationship between the Jewish and Catholic people. During the event, Rabbi Abraham Skorka, visiting University professor and a close friend of Pope Francis, offered remarks on the significance of the sculpture to SJU’s 2018-19 academic theme, “Community Engagement.” 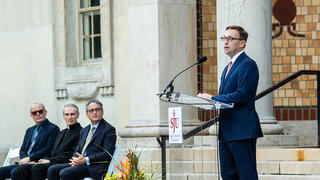 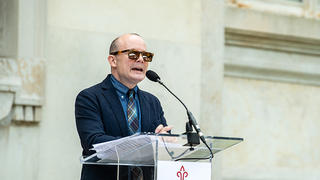 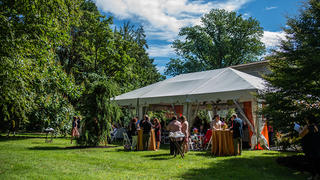 “SJU is the ideal partner to strengthen the horticulture program and ensure the long-term growth of the Barnes Arboretum," said Barnes Foundation executive director and president Thom Collins.

The garden party was held under bright blue skies on the grounds of the Barnes Arboretum.