Taylor Stokes ’22, a criminal justice major from West Philadelphia, is eager to lead initiatives that would help create a more inclusive and diverse campus community.

­Growing up, Taylor Stokes ’22 was always interested in student leadership and government. It was a passion that blossomed when she started college at Saint Joseph’s University and became more involved in student organizations and diversity, equity and inclusion (DEI) work.

“I loved learning about the ins and outs of what’s going on with students and seeing how I can change things or help out in some way,” says Stokes, a criminal justice major and justice and ethics in law minor. The West Philadelphian says she plans to study discrimination law after graduation.

Now, Stokes will have a larger impact and make history as the first Black president to serve in the University Student Senate at Saint Joseph’s. As president, Stokes says she’ll lead the effort in ensuring DEI is at the forefront of the University.

“The first way to do that is through students. Students have a lot of push and power here on campus,” she explains. “I know I can help shape the student body and focus on diversity initiatives during my term, which I hope will continue after I leave.”

Pushing for Inclusion and Diversity on Campus

Stokes says she’s made it her personal mission to prioritize inclusion and diversity in every space she occupies. So, when a racial bias incident occurred on campus in her freshman year, she knew she had to do something in response.

“I knew there had to be policies, conversations or campaigns we needed to initiate as a community to make St. Joe’s more inclusive and to educate people and make sure they’re learning from their mistakes,” she says.

It was what sparked her interest in joining the Student Senate. “I wanted to be a voice for students and an advocate for change, but also to be a resource to my community and help out with DEI matters,” she says.

Prior to running for Student Senate president, Stokes served as the inaugural secretary of inclusion and diversity for two years. As secretary, she often collaborated with Nicole Stokes, Ph.D., associate provost for inclusion, equity and diversity (no relation to Taylor). They worked on numerous projects, including a campus-wide solidarity walk last summer — an idea that Taylor’s sister, Aliyah Stokes ’21, came up with to protest George Floyd’s death and the continued violence against the Black community in the U.S.

I wanted to be a voice for students and an advocate for change, but also to be a resource to my community and help out with DEI matters."

“[Taylor] is very dedicated to the work of diversity, equity and inclusion, and I think she tries to include a good swath of student leaders on campus and have them buy into it,” Nicole Stokes says. “I think she’ll definitely advance the work started by Senate and former student body presidents, such as supporting our first Day of Dialogue event. I think she’s going to move the needle, and I’m encouraged to see the direction that she takes.”

Outside of Student Senate, Stokes has also brought awareness to DEI issues through her roles as the president of Black Student Union and founder of #BeCivil, a student-led campaign aimed at promoting inclusion and diversity through open dialogue, action and education.

“I want to make sure that when students think about DEI, they don’t just think about race,” Stokes explains. “It’s also about class, gender, justice and the basic right to deserve to be treated with dignity. There’s so much more that people don’t think about when it comes to our identities, and I want to bring awareness to that and normalize it.”

Showing Up and Getting the Work Done

Being elected as the first Black Student Senate president means a lot to Stokes. “I’m happy that I’m the first because it also means I’m not the last,” she says. “It says that you don’t need to fit this standard to be passionate about changing the student body, and I want people to see that.”

Stokes says she’s excited for what’s to come this year. She has several goals for the Senate, one of which is to work with students from the University of the Sciences to prepare for the merger. “We want to make sure the incoming student body from [USciences] feels welcomed here and that their ideas are heard,” she says.

You don’t need to fit this standard to be passionate about changing the student body, and I want people to see that.”

She also wants to expand identity workshops hosted by #BeCivil to encourage more students, faculty and staff to engage in civil discourse across campus. Additionally, she wants to boost campus culture and spirit and make sure all students have the support they need as they return to campus during a pandemic.

Stokes encourages all students to take an active role in creating a more inclusive campus environment. There are numerous ways they can make a difference, she says — from running for a Senate position or attending Senate meetings, which are open to the public, to participating in different events hosted by the Center for Inclusion and Diversity, affinity-based student organizations and community groups outside the University.

“It can also be something as simple as a social media post or bringing up an article in class that can spark a conversation around diversity,” Stokes says. “Just like with the civil rights movement, everybody has a role. Not everybody will be the Martin Luther King, Jr., at the front; there are a lot of people behind the scenes doing the work.” 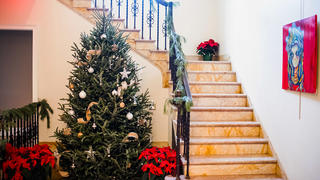 Holiday Gift Guide 2021: Gifts for Every Hawk in Your Life

Feeling the stress of holiday shopping? Don’t worry — to help out, we’ve curated a list of 14 of our favorite Hawk-inspired gifts that are sure to be a hit this year. 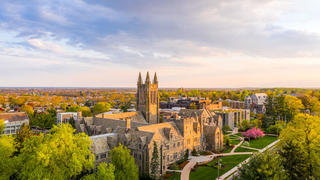 10 Tips to Secure Your Dream Job (Even During the Pandemic!)

Are you searching for an internship, full-time position or part-time job? We consulted with SJU’s Career Development Center to build a list of 10 tips that are guaranteed to make your job search more successful. 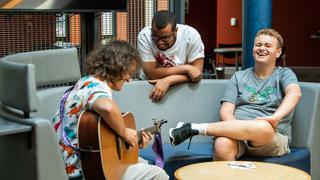 The residence hall will open next fall and serve as an additional support option for college students on the spectrum.