On Friday, April 19, Saint Joseph’s University held the inaugural induction ceremony for Tri Alpha, a national honor society for first-generation college students. The University has been designated the honor society’s Beta Lambda chapter, and 65 undergraduate students — including four adult learners in the Professional and Liberal Studies Program — were inducted in a ceremony held over Zoom.

In order for a student to be eligible for this honor society, they must be a first-generation college student, meaning neither of their parents can hold a four-year college degree. The student must also have completed 30 or more credits and have a GPA of 3.2 or higher.

“There’s always a disadvantage if you’re first-gen, in terms of not having [the path to college]  paved for you,” says Nancy Komada, Ph.D., director of the Office of Student Transitions and Beta Lambda administrator. In comparison, she says that students whose parents went to college may be able to provide guidance based on their own personal experience. “For example, their parents may monitor their progress and give them advice, like when to drop a class instead of taking a lower grade that would affect their GPA for the rest of their college career.”

Komada also says that many first-generation college students are often commuter students. “This means they have to juggle home life as well as academics,” she explains. “They might  have to watch their younger sibling, walk the dog … I’ve also had students who were responsible for their grandparents on hospice.”

Natalie Walker-Brown, M.S., director for Inclusion and Diversity Education Achievement (IDEA) at Saint Joseph’s, says that honoring these students’ experiences and acknowledging their resilience and grit can help expand their support network on campus.

“This is an opportunity to provide a community for folks who have shared life experiences, have the same struggles and obstacles, but also the same joys and accomplishments,” she says.

Komada and Walker-Brown have been working since September to institute this new chapter of the Tri Alpha honor society on Hawk Hill. They held a meeting during National First-Generation Week back in November, where they tried to drum up interest in the idea. They wanted to make sure the University’s first-generation students were aware that this society existed and what it would mean to join, so they held a general interest meeting and invited all eligible students.

To ensure safety precautions during the pandemic, the induction ceremony was held over Zoom, and led by the faculty chapter advisors, Elizabeth Lee, Ph.D., assistant professor of sociology, and John Yi, Ph.D., an associate professor of decision and system sciences. Yi is also a first-generation college graduate.

This is an opportunity to provide a community for folks who have shared life experiences, have the same struggles and obstacles, but also the same joys and accomplishments.”

As each recipient was called, their names, pictures, majors and hometowns were displayed on screen, along with a quote from the student.

“I am the symbol of my parents’ American dream,” was the quote from Lesley Reyes Pina ’22, a criminal justice major. “I am representative of the many more successes that will come to my family!” She says that being inducted into this honor society means her parents’ hard work and tireless nights did not go to waste, and she will be the one paving the way for her siblings and cousins.

In the Zoom chat, family and friends of the inductees sent messages of support, pride and love.

“Nancy and I wanted to make sure this event still had the prestige and the gravitas that you want to celebrate and recognize this huge accomplishment,” says Walker-Brown.

After the Zoom ceremony, inductees were invited to come to campus where they’d receive their printed certificate, and seniors could pick up their graduation honor cords. The inductees could also sign the Beta Lambda chapter book, and pick up a cookie made by a local baker, with the Tri Alpha logo on it.

Walker-Brown says she was pleasantly surprised by how many people showed up.

“It was a colder, cloudy sort of day, but we got way more people than expected,” she says. “Some inductees attended the ceremony online from their cars, so they could come directly over. People wanted to take pictures and pick up their certificates.” Some of the adult PLS students showed up with their children, and others watched the ceremony with their children and families.

“This is also a special moment for the families,” says Walker-Brown. “We had a good number of parents who were like, ‘My baby did it!’ This is a huge accomplishment for them as well, and this may set the tone for literally generations to come.” 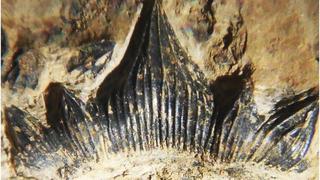 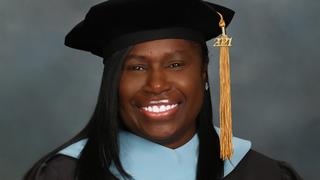 When the COVID-19 pandemic threatened to prevent Yalon Dirickson-Martin ’21 from completing her doctoral dissertation, she adapted – just as she had after suffering a debilitating stroke when she was 28 years old. 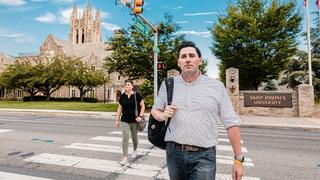 During a panel hosted by Campus Philly, three Saint Joseph’s students and alumni shared how grad school made an impact on their lives and careers.