SJU Student is Coding His Way to Hollywood

SJU track star Sebastian Eaton-Castellano ’21 ’23 (M.S.) is enhancing his B.A. in film by working toward a masters degree in computer science. 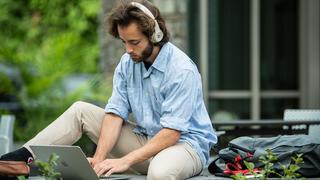 Sebastian Eaton-Castellano ’21 ’23 (M.S.) has film in his blood. His mother studied acting in Europe and his aunt was a successful film producer in Venezuela. Eaton has considered himself a film buff from a young age, devouring major motion pictures with cutting-edge visual effects and graphics. So how does a legacy movie lover with a globetrotting childhood end up at Saint Joseph’s University?

“Track is a really big part of my life,” explains Eaton. “So while I was actively looking to enroll in a good film program, I wanted to make sure that I would also be able to join a strong track team.”

Mike Glavin, the head coach for men’s track and field at SJU, recruited Eaton for an overnight visit and the rest was history.

“I loved it,” remembers Eaton. “Everyone on the team was really great and, even though the film program was small, it was robust. I knew I was going to get a lot of access to professors and their networks that I probably wouldn’t get in a larger program.”\

Eaton also valued Hawk Hill’s proximity to the city, where he was planning to pound the pavement and make his way into different production jobs.

“A lot of filming happens in Philly,” notes Eaton. “It’s not LA or Vancouver but Philly has a film scene and being close to it mattered to me a lot. So St. Joe’s was perfect.”

He wasted no time. Starting in his freshman year, Eaton used his developing filmmaking skills to support Student-Athlete Night for the SJU Hawks — an honor he would continue to take on through his junior year (the event was canceled in 2020 due to COVID-19).

That summer, Eaton had secured his first job directing and producing a commercial for a local business, Pro City Services, based out of New Hampshire.

Getting to understand the client’s vision and working with him to bring out my ideas — it was my first real taste of the business.

“It was so much fun,” Eaton says. “Getting to understand the client’s vision and working with him to bring out my ideas — it was my first real taste of the business.”

As a film major, Eaton was able to cycle through all the different roles and responsibilities of a typical film production crew. He directed, produced, participated in lighting and set design, learned about camera operation, sound production, editing, color correction and After Effects.

Through it all, he noticed one common theme. Computers.

“Everything on set and in post-production is run through computers. It’s all computers, which got me thinking,” he says. “If something goes wrong with our cameras or our editing software, it would probably be pretty valuable to know how to fix it, right?”

To add to that, Eaton was bound and determined to focus his filmmaking energy on CGI, or Computer Generated Images.

“While I was working in After Effects, I noticed I couldn’t get any of the precise effects I wanted without actually coding into the program,” Eaton says. “So that’s when I was really convinced I needed to get a computer science degree.”

Eaton, who commenced from Hawk Hill with his undergraduate degree in 2021, quickly enrolled in SJU’s stackable computer science masters program to continue his education while maintaining his position on the track and field team.

Life has been hectic for Eaton, though. As he dives further into his film career and takes on a new degree program, he has come to realize that an around-the-clock production schedule ends exactly when his training and meet schedules pick up.

“One really memorable experience was wrapping a shoot at 3:30 in the morning when I knew I had to be up at the gym for lifting at six,” he recalls. “And there was nothing I could do about it. It was the only time our actor was available.”

But Eaton wouldn’t change it for the world.

“When you find something you really like, you should be able to throw yourself into it entirely,” he says. “I found two of those things — film and track. I’m so lucky to be juggling them.” 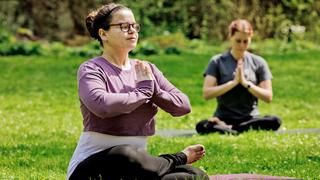 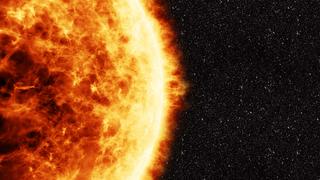 SJU's Physics Lab Coordinator Mark Scafonas, Ph.D., is excited to guide new students in Introduction to Astrophysics studying the sun as it enters into a new 11-year solar cycle — a phenomenon which could have a serious impact on the Earth’s infrastructure. 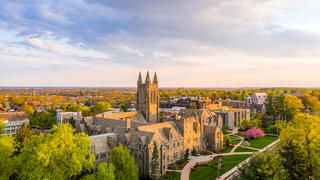 Four faculty members were appointed to the prestigious Dirk Warren ’50 Sesquicentennial Chair position, as it has been reimagined to support multiple areas of expertise across the University.