In 1922, Dr. Albert C. Barnes and his wife, Laura Leggett Barnes, built their educational institution: The Barnes Foundation on a property in Merion which already housed a collection of specimen trees that its previous owner, Captain Joseph Lapsley Wilson, had started assembling in the 1880s. These trees were the startup of the present arboretum.

If Dr. Albert Barnes expressed his passion through art appreciation; his wife Laura expressed hers through the cultivation of beautiful plants and the establishment of the horticulture education program, which remains unique in the Delaware Valley. Her legacy lives on in the beauty of the landscape and teaching collections of the arboretum, and in the horticulture school that she founded in 1940. 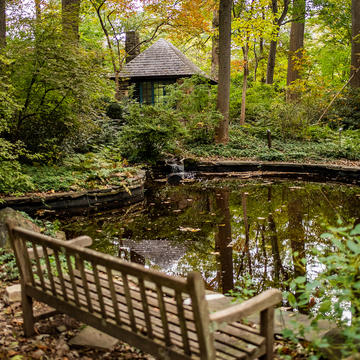 Barnes at a Glance

The 12-acre arboretum is astonishingly diverse for its size, with more than 2,500 taxa of woody and herbaceous plants, many rare. The peony, lilac and fern collections, which date from the early 1900s, are important genetic resources for conservation and study. An herbarium started in 1968 by John Fogg, a longtime instructor at the school and director after Mrs. Barnes, contains more than 10,000 specimens that supplement teaching and research. 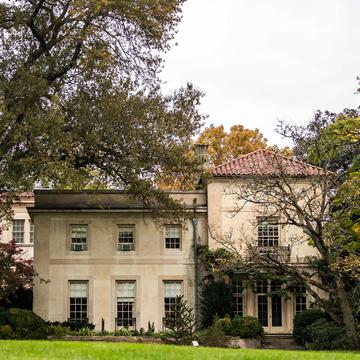 The Barnes retains oversight of the Arboretum and the historic buildings, while the operations and grounds are now managed by Saint Joseph’s University. Learn more about this historic partnership. 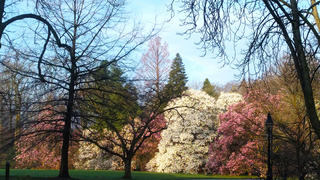 A visit to the arboretum is a wonderful way to extend your experience of the Barnes’ legendary art collection in Philadelphia. Venture a mere eight miles from the city to explore this hidden treasure filled with magnificent specimens of rare trees, plant collections and breathtaking blooms, the original Barnes’ site.

The arboretum is a member of Greater Philadelphia Gardens and American Public Gardens Association, and is a featured stop on America’s Garden Capital Passport.  It is one of the few gardens in the United States accredited by BGCI.

History at The Barnes

In 1922, when Dr. Albert C. Barnes and his wife, Laura Leggett Barnes, bought the Merion property, it already housed a collection of specimen trees that its previous owner, Captain Joseph Lapsley Wilson, had started assembling in the 1880s. The site became the home of the Barnes Foundation, and Wilson stayed on as the first director of its arboretum.

If Albert Barnes expressed his passion through art appreciation, his wife, Laura, expressed hers through the cultivation of beautiful plants.

The daughter of a wealthy family from Brooklyn, Laura Leggett married Dr. Albert C. Barnes in 1901. Though the origin of her interest in horticulture is unknown, there is evidence that she managed the gardens at Lauraston, the couple’s first home in Merion, Pennsylvania.

Laura Barnes became director of the arboretum in 1928, and in 1940 founded the horticulture school, where she was also an instructor. Responsible for the acquisition of plants for the gardens, she corresponded and exchanged specimens with many other notable collections, including Harvard University’s Arnold Arboretum and the Brooklyn Botanic Garden.