SJU’s CineHawk, Jaylen Dotson ’21, is getting ready to fly the coop. But before taking off, Dotson spent a few moments reflecting on how switching majors opened him up to a new world of possibilities. 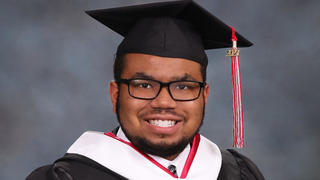 “To be completely honest with you, I didn’t think I’d end up at St. Joe’s,” Jaylen Dotson ’21 abruptly admits.

As he made his way through the college admissions process, Dotson was accepted into a variety of other universities’ undergraduate programs, but he made his final decision to attend Saint Joseph’s after participating in its annual Admitted Students Day.

He participated in Walk with a Hawk, an activity where admitted high school seniors are invited to shadow current freshmen on campus for a day. There, Dotson met students whom he still communicates with regularly today.

“I made great friends that day who helped me feel more comfortable on campus when I started,” he notes. “It definitely seemed like everyone here was friendly and welcoming.”

Dotson enrolled at SJU as an ASPIRE student with the Kinney Center for Autism Education and Support, majoring in political science with aspirations of becoming a lawyer. But freshman year was tough — Dotson experienced quite a few growing pains as he acclimated to college life and he wisely reached out for support navigating through his first year

“The CAPS program really helped me,” he says, referring to the University’s Counseling and Psychological Services. “For sure, without them, I wouldn’t be graduating. I went through a pretty dark time at the beginning of college, so I was really grateful to have that lifeline.”

As an ASPIRE student, Dotson also worked with a case manager who saw him through his time of crisis. She encouraged him to channel the unharnessed energy he had into one of his passions — film.

“I’ve always really enjoyed fiction and storytelling, especially in TV and movies, and I love to analyze the stories being told,” he explains.

I’ve always really enjoyed fiction and storytelling, especially in TV and movies, and I love to analyze the stories being told.

Once his case manager suggested a deeper dive into his film hobby, he approached The Hawk, Saint Joseph’s student newspaper, about writing television and film reviews — soon after, CineHawk was born. CineHawk is a features column written by Dotson that covers all types of cinema, from titles on streaming services to major motion pictures to premium channel series, rated on a scale out of 10 Hawks.

Soon after he began CineHawk, Dotson knew he had found his true direction. He quickly changed his major from political science to film and began working toward a new depth of understanding in the subject, which can be clearly seen in the discerning and critical prose of his reviews.

“For individuals with ASD, [autism spectrum disorder], communication and expression can be a challenge,” notes Alli Gatta, M.S., LPS, NCC, assistant director of college support at the Kinney Center and Dotson’s current case manager in the ASPIRE program. “Jaylen has used his passion for film and TV as a way to connect with the world through his reviews and has been able to develop communication skills through the process.”

CineHawk reviews are put out weekly by Dotson and he partners with design students to create the featured artwork that goes along with them. He covers the whole gamut of cinema — from scifi to crime, comedy to drama.

“My favorites are horror, thrillers and action and adventure,” he lists off, “I actually just submitted my final CineHawk review yesterday on ‘Godzilla vs. Kong’ and it was kind of bittersweet for me.”

But Dotson has bigger fish to fry in the coming weeks — namely, the final draft of his feature-length crime thriller screenplay, which he will soon be submitting as his thesis project. As he wraps up the loose ends of his course load, Dotson also continues to manage Kinney’s front desk part time and work as a SCHOLAR mentor to his peers in the ASPIRE program, a role he was just certified for this year and thoroughly enjoys.

“Jaylen’s dedication and attention to detail has made him a model employee at the Kinney Center,” remarks Gatta. “[He] takes time to reflect on his work and ask for consistent feedback to improve how he supports mentees and clients.”

This summer, Dotson is planning to resume an internship he had taken with the Department of Defense before the pandemic prevented in-person office work.

And as far as his time on Hawk Hill? He gives it eight out of 10 Hawks. 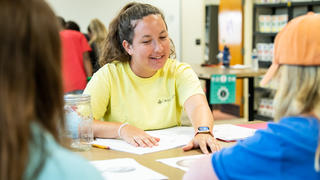 The Journey to Becoming a BCBA

The path to becoming a Board Certified Behavior Analyst (BCBA) can be a long one and requires lots of dedication. Aspiring BCBAs must complete Graduate Level coursework in Behavior Analysis, complete 2,000 hours of supervised fieldwork, pass the BCBA exam, and become licensed in the state that they wish to practice in. Later this year, three of our Graduate Assistants will take the final steps in this process and sit for their exam. Clare Peropat '20, '22 (M.S.) started her training when she worked at the Kinney Center as a SCHOLAR and now shares her story as she looks back at her time at the Kinney Center. 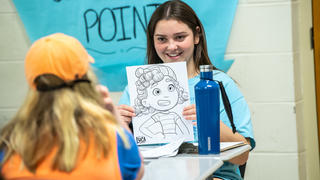 Reasons to Become a Kinney SCHOLAR

From leadership roles to appreciation events, there are many reasons to become a SCHOLAR. Megan Armbruster gives her reasons why she loves her job as a Kinney SCHOLAR! 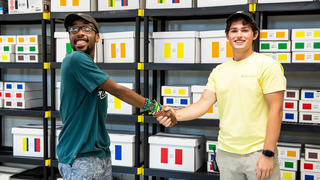 Securing and retaining a job are some of the biggest hurdles facing individuals on the spectrum today; employment rates are estimated to be around 20% (Austin and Pisano, 2017). However, did you know that roughly 81% ASPIRE graduates have secured employment after leaving SJU? Read on for some tips that neurodivergent candidates can employ to obtain employment.