Editor's note: This article was written prior to University of the Sciences' merger with and into Saint Joseph's University and does not reflect the current, combined institution. References to programs, offices, colleges, employees, etc., may be historical information.

Having grown up in the 1980s and 1990s, Anthony Minniti '93 (P) witnessed the HIV epidemic and its impact on members of the LGBTQ community and on many of his friends. As an independent pharmacist, this experience has also impacted his career. He recently dedicated himself to improving access to PrEP, a life changing, preventative medication that can protect individuals from contracting HIV and opened the first pharmacy-based clinic in New Jersey in 2020.

“After being approached by a friend with a question about a medication called PrEP, I knew I could help,” he said. “It was then that I decided to do my part in creating awareness and opening access any way I could.”

Pre-exposure prophylaxis, or PrEP for short, is a medication that became available to the public in 2012 and is used to protect against the transmission of HIV. After learning more about the drug, Minniti realized that it could be a resource, not only for members of the LGBTQ community, but also for intravenous drug users who are at risk of contracting HIV.

In 2017 Minniti, the owner of Bell Pharmacy in Camden, began developing his practice model for a pharmacy-based PrEP clinic- the first of its kind in the state of New Jersey and early in the game nationally. In partnership with the Camden Area Health Education Center (Camden AHEC), the program launched in July 2020.  Today, they serve more than a dozen patients in the community, and continue to grow.

“By bringing our resources together with the resources of the great community organization at Camden AHEC, we just knew that together we would reach the people and we would be able to help the people.” Minniti shared. 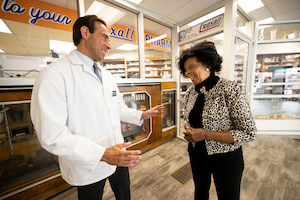 Camden AHEC has been a mainstay of health and education in the community for over 40 years. The organization is dedicated to providing easily accessible, flexible, and safe resources for all around health, focusing largely on HIV/AIDS services. With Bell Pharmacy, Camden AHEC is able to provide a one-stop source of education, clinical services, and care for populations at-risk of contracting HIV. What is typically a lengthy process consisting of multiple doctors visits, tests, and pharmacy visits, has been brought under one roof.

“Bell Pharmacy is very well respected and very well known in the community in terms of working with all of the neighbors and residents,” shared Martha Chavis, CEO of Camden AHEC. Chavis continued, “As a resident of Camden City myself I can tell you that goes a long way. We have happily been able to coordinate to have a one-stop-shop for our PrEP service.”

In addition, the clinic won the 2021 Community Pharmacy Innovation in Quality Award from The Pharmacy Quality Alliance. This distinction came after their application received numerous letters of support including a message from the State of New Jersey Department of Health (NJDOH).

Ka’leef Stanton Morse, executive director of HIV services at NJDOH wrote, “The collaborative approach undertaken by Bell Pharmacy in partnership with Camden AHEC to design and launch a Pharmacy-based STD Clinic Practice Model, including PEP and PrEP, presents a national model for integrating community services with 340B-eligible pharmacy services with a community collaborative approach that benefits the most vulnerable populations.” 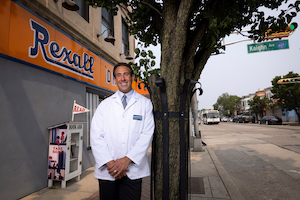 Following in the footsteps of his grandfather, Bernardo Doganiero '39 (P), Minniti attended University of the Sciences to study Pharmacy. Minniti credits his time at USciences for preparing him for the future of pharmacy, most notably he recognizes Cal Knowlton, PhD, who helped him to embrace a world where pharmacists managed patients in a greater, more personal way.

“[Dr. Knowlton] believed that pharmacists were trained to do so much more and were true medical practitioners,” he said. As part of Dr. Knowlton’s “Business of Pharmacy” class, Minniti wrote a paper entitled “The Purchase of Bell Pharmacy” which later played a role in his family taking ownership of the pharmacy in 1997.

Going into his career with this patient-first mentality, Minniti emphasized Bell Pharmacy’s commitment to personal service provided by neighborhood pharmacists, while also expanding this care to meet other unmet needs of the community such as mobile immunization clinics, HIV disease management, and substance use treatment. Bell Pharmacy also specializes in a number of LGBTQ issues, including PrEP.

Looking ahead, Minniti plans to continue expanding the program and encourage others to follow in his footsteps. “What began as the first pharmacy based PrEP clinic model has evolved into a full scale ‘Risk-Harm Reduction’ practice built around the ‘hub’ of pharmacy,” he said.