Over the last three and a half years, Peter Clark, S.J., Ph.D., professor of medical ethics and director of Saint Joseph’s Institute of Clinical Bioethics, has been working with his residents and colleagues to create a curriculum around death education for high school students. 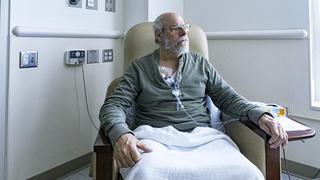 Death. It’s the only absolute commonality among all living things. We have a beginning and an end; we are born and then, inevitably, we die. So how is it possible that the majority of people get to the end of their lives feeling so unprepared to deal with the decisions that need to be made?

Over the last three and a half years, Peter Clark, S.J., Ph.D., professor of medical ethics, director of Saint Joseph’s Institute of Clinical Bioethics and the John McShain Chair of Ethics, has been working with his residents and colleagues to create a curriculum around death education for high school students.

In 2011, Clark published “Death with Dignity,” a thorough examination on end-of-life issues like do-not-resuscitate orders, living wills, pain management and medical futility. It was this book that led Clark to the idea that young people should be better equipped with this knowledge so they can prepare their families and themselves for those final stages of the living process.

“As I go on rounds with my residents at the hospital, it’s astounding how many patients simply do not have advance directives,” says Clark, who oversees the ethical training of medical interns, residents and fellows in area hospitals. “Their families are having to decide whether or not they should get a tracheotomy or a feeding tube without any practical knowledge of what the individual in treatment would want for themselves.”

As Clark and his residents watched bewildered families make educated guesses about the treatment preferences of their loved ones, it became clear that implementing this type of education in the teenage years would double its impact.

“If we educate the young, it will hopefully lead them to have these hard conversations with their parents, their grandparents,” explains Clark. “That would then increase the likeliness of living wills, the comprehension of DNR orders.”

David Grana ’21, study co-author, former biology major at Saint Joseph’s and current medical student at Thomas Jefferson University, points out that this type of death education is also a wonderful way to work through the pain of loss.

“Being able to spring into action during moments of really tremendous loss can help alleviate a lot of mental stress,” notes Grana. “If these kids approach situations of loss armed with the knowledge of what to do at the end of life, they’re still going to be deeply troubled and hurt by the loss but they’ll take comfort in knowing their action is helping the family and community members around them. I think that's really why we wanted to target high school students especially.”

"If these kids approach situations of loss armed with the knowledge of what to do at the end of life ... they’ll take comfort in knowing their action is helping the family and community members around them."

Clark and his co-authors designed the death education curriculum with Jennifer Donohue, a public school administrator who specializes in curriculum design. When building the curriculum, the group was very intentional in implementing the use of different media for instructional purposes, with an emphasis on video and podcast-type audio lessons.

“The big question was, how do we make kids not only aware of these topics but really understand them,’” says Grana. “I think videos have been a great tool, especially for high school students who are getting a lot of their information from concise, informational videos on YouTube and TikTok these days.”

The death education curriculum was built out to cover more than just an understanding of official documents and medical terminology. Students will also learn about the importance of including spirituality in a death plan, the essentiality of pain assessment and management and the dangers of overtreatment, or what Clark and his colleagues refer to as a “bad death.”

“Doing too much, medically, and adding treatment on top of treatment to correct other medical errors — that’s what leads to heart disease, it causes cancers,” says Grana. “It’s medical treatment that doesn’t take into account the whole patient and places too much emphasis on the medical component of care.”

As any student of death education will tell you, medical treatment is only one very small aspect of end-of-life care.

“Spirituality is a major aspect of death and dying that gets overlooked,” remarks Daniel DiSandro ‘22, currently a senior research fellow in the Institute of Clinical Bioethics and an economics major at Saint Joseph’s with plans to attend medical school upon graduation. “Spirituality is a large part of most patients’ lives — especially at the end — and that should be at the forefront of the holistic health care that doctors are supposed to be providing. It can’t be ignored, it almost becomes more prevalent at that time.”

Clark is a firm believer in this and notes that much of the death education curriculum is, in fact, quite applicable to physicians themselves.

“Just last Friday, Daniel and I were on rounds and we came to a terminal patient and asked, ‘what’s the prognosis,’ and the resident said, ‘poor prognosis,’” recalls Clark, who then quickly pointed out that the patient had metastatic cancer. “So I asked why we would be telling this patient he has a poor prognosis when we know he’s terminal and the resident said, ‘I’m not using the D word! That’s the attending’s job!’”

Fear of upsetting patients by mentioning the prospect of death, or ‘the D word’ as this resident called it, is part of a larger issue in the medical field.

“In medicine, we call it the conspiracy of silence when patients are dying and physicians just keep giving them another round of chemo, another radiation or another experimental drug instead of telling them, there's nothing more we can do,” says Clark. “That's why we really push hospice and palliative care options in death education because it gives people a quality of life at the end.”

Death education is a tool that can give physicians a much more thorough understanding of how to deliver bad news and sit in discomfort with their patients and families — going beyond the medical into that holistic treatment mentioned by DiSandro.

Having an actual understanding of pain management and hospice care options, where patients are able to die with their family surrounding them — no tubes, no hospital — is essential to anyone faced with making seemingly unending treatment decisions.

“It's amazing how many people just want to know what their situation is so they can die peacefully,” says Clark. “And that's all we're trying to get across to physicians and regular people alike — that you can die peacefully.”

The death education elective is currently being assessed for implementation at three different Jesuit high schools in the Philadelphia region. But finding faculty equipped to teach the course has schools at a loss.

“It looks like finding teachers who really feel comfortable giving instruction on this subject is going to be the most challenging part,” says Clark. “So there may be some sort of training that we need to develop for the educators themselves so they feel better prepared to provide instruction.”

Clark and his team stay ready to produce these resources for educators should it be determined that they are necessary. In the meantime, they continue to emphasize the importance of death education and utilize holistic end-of-life tactics in their day-to-day professional work.