A Look Back: 125 Years of the Alumni Association

In honor of the 125th anniversary of the Saint Joseph’s Alumni Association, we’re sharing 25 key events from the association’s storied history. 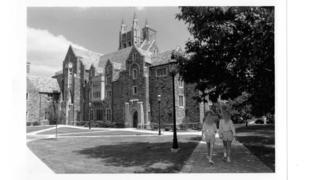 The first graduating class of Saint Joseph’s College banded themselves together to form the Alumni Society, comprising seven members. The purpose? "To promote what most conduces to the exaltation of the individual, society and their beloved alma mater." The formal establishment of the society was effective on June 25, 1896, and Joseph V. Crowne was elected its first president.

Under Charles Davey, S.J., who was elected University president in 1914, the Alumni Association grew and the evening college, with approximately 1,000 students, was created.

Alumni Association eligibility is expanded to include those who were registered for one year and left in good standing. The first alumni directory was compiled and published by a loyal group of alumni from the Greaton Society: Joseph Cox, Jules Lentz, George Arnholt, Eugene White, Joseph Murphy and William Diamond. The directory contained 4,100 names.

The first regional group, the New York Chapter of the Alumni Association was formed in June. Ten years later, in 1941, they would hold their first annual dinner prior to the Saint. Joseph's vs. St. John's basketball game at Madison Square Garden.

The Hawk student newspaper becomes the official medium for announcements and events from the Alumni Association.

The Alumni Association led the drive to secure funding and equipment to construct a new library, to be named "Alumni Library." The Hilaire Belloc Society was established to preserve the history of the College and create a stronger union between the alumni and current students.

The Class of 1939 used their treasury to pay a lump sum to cover the first year dues for the entire class, thus becoming the first class to join en masse.

The Alumni Association held a testimonial dinner for 1,500 alumni and friends to honor Sen. Francis J. Myers '23, the first graduate of Saint Joseph's College to serve in the Senate. He was presented with a bust created by sculptor Lou Milione, father of Lou Milione, Jr. '38.

Under the charge of the Public Relations, Placement and Alumni Association Executive Secretary, the College is the first among Eastern institutions to enter into an agreement with the Pennsylvania Department of Labor and Industry to utilize their placement opportunities. In the summer months, just under 100 student and alumni placement requests were filled.

The Hawk mascot originated when cheerleader Jim Brennan '58 rallied the student government to raise the $120 needed to create the original suit.

The first Saint Joseph's College Medical Alumni Association Medal is awarded at graduation for the premed student with the highest academic standing for four years.

Johnson E. Collins Jr. ’65 is the first African American to be elected President of the student body. He became the first Marshall Scholar of the University in 1965.

Bart Sheehan '27 is the first recipient of the Francis X. McClanaghan Award at the 7th Annual Law Alumni Award Dinner. This was the first year in which the name was changed to honor McClanaghan '27, the founder of the Law Alumni Group.

To celebrate the College's 125th anniversary and the country's bicentennial, a gala was held on May 8, 1976, at the Bellevue Stratford. Early reservations were encouraged as, at the time, 1,200 alumni lived within 50 miles of the College.

The University establishes its first chair, the Alumni Partners Chair of Accounting. All but one of the founders was an alum.

The President of the Alumni Association, Gerard St. John '59, along with University President Nicholas J. Rashford, S.J., Chairman of the Board Paul Henkels and Senior Pledge Chair Sue Ann Hickey break ground on the Chapel and Campus Ministry Center.

The Office of Veterans Affairs opens, thanks to a generous alumni donation to develop and implement a program to teach disabled veterans how to run their own business.

The Diversity, Equity and Inclusion (DEI) Council, a subcommittee of the National Alumni Board is created to foster welcoming and inclusive experiences and spaces for the alumni community and to better engage and connect with the diverse segments of the overall alumni population. Reese Blair ’98 and Christian O’Brien ’13 are appointed as co-chairs of the initiative.

Saint Joseph’s University and University of the Sciences (USciences) announced a historic merger agreement to integrate into one University. Upon completion, the University will boast nearly 96,000 alumni combined.