The Plays are the Thing: Studying the Harlem Renaissance through Theatre 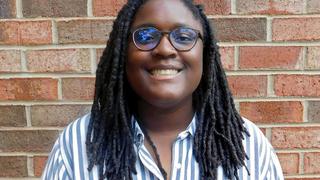 When students learn about the Harlem Renaissance – the blossoming African-American culture of the first third of the 20th century – they often learn about Langston Hughes, W.E.B. Du Bois, Josephine Baker and Louis Armstrong.

Dominique Joe, a graduating English major, appreciates the greats, but she knew that popular learning was only scratching the surface. She undertook a research project to learn more about the period and presented her findings, "Thurman and Cullen Were Playwrights Too: Blackness, Genre, and Form in the Harlem Renaissance," at the Celebration of Student Achievement Poster Session in April.

Joe, who works for SJU’s Writing Center and is opinions editor for The Hawk student newspaper, was surprised in her early research to find out how expansive the Harlem Renaissance truly was, and decided to focus on plays, which she saw to be an under-studied medium.

“My paper asserts that, in part, Harlem Renaissance plays are discarded in how the period is memorialized by scholars because they reveal the complexity of defining Blackness,” Joe explained. “In particular, I focus on plays by Wallace Thurman and Countee Cullen — "Harlem: A Melodrama of Negro Life" and "The Third Fourth of July," respectively — because neither artist fits the standard lifestyle and philosophy of the period.”

In her paper, Joe calls attention to the fact that, although the Harlem Renaissance was a popular artistic movement, it is often talked about in a constricted way – academics tend to only look to a few writers to sum up an entire artistic era.

Joe’s passion for the subject was stoked by a class on the Harlem Renaissance taught by Aisha Lockridge, Ph.D., associate professor of English. She hopes that the paper will inspire more literary scholars to write about race and more professors to make it a more deliberate part of their curriculum to encourage a well-rounded, open-minded educational environment.

She went on to highlight the help she received from Lockridge, who mentored her for this project.

“The fact that I could turn to her when I was struggling to pinpoint my argument and really focus my research was incredibly helpful,” Joe explained. “I will always thank her for being that academically grounding figure for me through the course of my research for my Summer Scholars Project.”

After graduation, Joe plans to study for the GRE and/or the LSAT and apply to either Ph.D. programs in literature or law school.