The story of Zacchaeus in the Gospel of Luke, according to James Martin, S.J., can teach Catholics a great deal about how to reach out to populations that feel marginalized by the Church.

A tax collector who was ostracized by his community, Zacchaeus climbed a tree when Jesus came to Jericho so he could see over the crowds. When Jesus reached him, he called out to Zacchaeus and asked him to come down from the tree and welcome him into his home.

“Here was Zacchaeus literally out on a limb to see who Jesus was,” Martin said. “And that’s what [marginalized people] want. They want to know Jesus, but they can’t, because the crowds are in the way.”

Martin spoke for an hour to an overflow crowd at the Cardinal Foley Center on Sept. 17 about reaching out to the communities that feel left out by the Church. Martin’s talk focused largely on welcoming members of the LGBT community, which is the topic of his latest book, Building a Bridge: How the Catholic Church and the LGBT Community Can Enter into a Relationship of Respect, Compassion, and Sensitivity . The lecture was presented by Saint Joseph’s Faith-Justice Institute through the support of the Joseph William and Madeline Eberle Klein Fund.

While there are many groups who feel excluded from the Church — African-Americans, women and the poor among them — Martin argued that LGBT people are the most marginalized today.

“If you think about it, Pope Francis has called for a more decisive role for women leaders in the Church,” he said. “And you might have a parish that does specific outreach for African Americans. But there is very little comparable outreach for LGBT people. They feel like lepers in the Church. And if people are rejected by their parish … they feel rejected by God. And to me that’s a scandal.”

Martin, who is editor-at-large of the Jesuit magazine America and has written more than a dozen books, did more than just speak on campus. The lecture was part of a day-long visit to Saint Joseph’s, during which Martin met with students in the Center for Inclusion and Diversity. He listened as students from various groups shared their experience of feeling ostracized by the Church. During the lecture, he pointed out the danger of these feelings.

“Among young people in United States, 57 percent of LGBT people say they feel less safe because of the orientation,” he said. “One study shows that the more religious the family they come from, the more likely they are to be homeless because of rejection. It’s the opposite with straight kids. The more religious the family they’re in, the less likely they’ll be homeless because they feel loved. Isn’t that sad? That religion in families can turn people against their own kids?”

Catholics in the LGBT community, Martin said, crave to feel a sense of belonging in the Church. They want others to see their faith as much as they see their sexuality.

“Like everyone else in a Catholic institution who does not fully live under the Gospel teaching, LGBT people should be invited into the parish ministries,” he said. “Even if they are falling short they're not the only ones.”

Many individual groups and even some parishes are doing good work in making the Church more welcoming for marginalized Catholics, Martin said. Doing so only requires that they each treat others as they want to be treated.

“Like any group, LGBT people bring natural gifts to the Church,” Martin said. “For one, they’re compassionate. Because so many have been marginalized, they often feel a natural compassion for those on the margins.”

Martin encouraged those who may have pushed one of the denigrated groups away in the past to perform a “moral inventory” and consider if they have treated them fairly.

“Notice how Jesus treated people on the margins,” he said. “How he treats, for instance, the Samaritan woman in the Gospel of John who has been married five times. He listens to her and treats her with compassion and dignity. Be like Jesus. If the Church listened to LGBT people, 90 percent of homophobia and prejudice would disappear.”

Martin challenged those who would push LGBT people away from the Church to imagine them more fully, and to remember that they seek the love of God and their fellow Catholics.

“I don't mean stingy, judgmental, conditional, half-hearted love,” he said. “I mean real love. And what does real love mean? It means loving people in the complexity of their lives. Celebrating them when life is sweet and suffering with them when life is bitter, as any friend would.”

Reaching out to marginalized groups, Martin said, often makes some people furious. There will always be those who resist and want to change people’s behavior. But recalling the story of Zacchaeus, Martin said that while all those around him grumbled when Zacchaeus came down from the tree, Jesus welcomed him.

“For me, it seems like there are two places to stand when it comes to ministry to these excluded groups who feel marginalized,” he said. “You can stand with the crowd, who opposes an offer of mercy to them, or you can stand with Zacchaeus, and more importantly, stand with Jesus.” 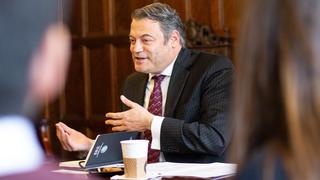 Carlos G. Obrador Garrido Cuesta, Consul General of the Mexican Consulate in Philadelphia, visited Saint Joseph’s on February 20 to discuss current and potential partnerships between the University and the Mexican government. 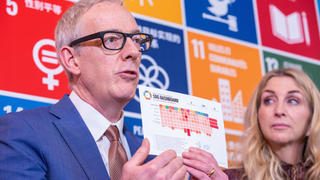 UN Sustainable Development Goals Dashboard Gets a Spotlight at Davos

At the 2020 World Economic Forum, David Steingard, Ph.D., associate professor of management, spoke as part of a panel on the role of the UN Sustainable Development Goals (SDGs) in higher education. 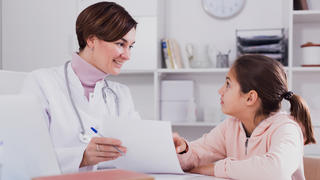 The first of its kind in the country, the program will offer a pre-medical pathway for Saint Joseph’s autism behavioral studies students to continue medical training.