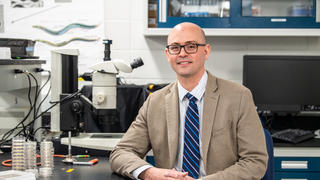 The National Science Foundation (NSF) awarded Matthew D. Nelson, Ph.D., assistant professor of biology at Saint Joseph’s University, a $750,000 grant to continue his research into the neuroscience of sleep.

The NSF recognized Nelson with a CAREER (The Faculty Early Career Development Program) grant, which the Foundation says is one of its “most prestigious awards in support of early-career faculty who have the potential to serve as academic role models in research and education.” These scientists represent future leaders in integrating education and research, according to the NSF.

Nelson’s research focuses on the sleep-wake cycle in nematodes, a “model organism” that is widely studied because of its simple biological makeup. More specifically, Nelson’s lab teases apart the genetic mechanisms that coax neural machinery in the worm, known as Caenorhabditis elegans (C. elegans), to activate sleep. C. elegans is one of the simplest organisms known to sleep, having a 302-celled nervous system, making them an ideal candidate for studying behavior with cellular resolution.

An early discovery in Nelson’s work revealed that damaging stress prompts the release of FLP-13 neuropeptides (molecules that act like neurotransmitters) from a single neuron in the worms’ brain called ALA. Recently, Nelson and his students identified the NLP-14 neuropeptide-signaling pathway that becomes activated following stress. They hypothesize that NLP-14 neuropeptides are also secreted from ALA to signal through unknown receptors on yet-to-be-identified cells. This is one focus of their current work.

The simple round worm and a powerful gene-editing technology called CRISPR make this research possible. CRISPR allows researchers to make precise changes in the genetic code to precisely study gene products, and in the case of Nelson’s work, the NLP-14 circuitry. Nelson and his students have created more than 200 strains using CRISPR and other transgenic approaches.

The transgenic strains created in Nelson’s lab have allowed the researchers to identify neurons that have been activated by neuropeptides involved in sleep. “Now we just need to connect the dots between specific neuropeptides and cells,” he says.

Whether NLP-14 exists in humans is not known, Nelson says. “But biology is conserved across all species, and the pathways we are studying have related genes in other animals. We know neuropeptides regulate sleep in humans, so by understanding the basic science about how a neuropeptide pathway can induce and control sleep, you can gain a lot of information about how a similar pathway might be acting in a more complex animal like a human.”