Serena Chung ’22 was the recipient of the Maguire Academy’s Horgan Family Scholarship during her final year at Saint Joseph’s. Now, she’s working with Horgan at Zurich North America. 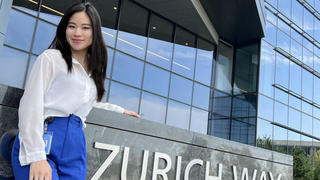 “My parents and I decided to go just to see what it was like,” remembers Chung. “St. Joe’s wasn’t even in my top five at that point.”

But, once she and her parents saw the financial aid package she’d be receiving, Chung took a look around the beautiful Hawk Hill campus and realized, this was it. She had found her place.

Chung quickly began making her mark at SJU as a finance and risk management major — she made the dean’s list and eagerly joined high-performing professional groups like Alpha Kappa Psi and Gamma Iota Sigma. Chung was determined to finish her degree in three years and, in order to do that, she needed to find additional resources and support. That’s when she found Paul Horgan ’91 (MBA).

“One of my advisors in the Maguire Academy tipped me off to the application for the Horgan Family Scholarship,” says Chung. “Once I received it, I actually connected with Paul, which made all the difference.”

Horgan, currently the advisor to the CEO of risk management and commercial insurance provider Zurich North America, was thrilled to put a face and name to the recipient of his scholarship, which was one of the first that launched the Maguire Academy's "Insure the Future for Diversity" campaign.

“Serena reached out to me,” says Horgan. “She was so persistent and determined — I give her a lot of credit for keeping our conversations going. Her confidence and her ability to stay in touch with me is really how she got to where she is today — she wasn’t just reaching out to thank me. She was reaching out to determine how she could leverage my network.”

The situation is just different for students like Chung, notes Horgan. Her success at Saint Joseph’s was dependent on figuring out how she would be able to finance her education.

“That's real life for people trying to afford a college education today,” says Horgan. “From our very first conversation I was taken with how focused she is on making sure she could be successful — finding out what it was going to take and then doing it. She was always lining herself up to make it happen.”

Chung has been consistently proactive in finding opportunities. During her time at Saint Joseph’s, she competed in Selling with the Bulls at the University of Florida, traveled to San Francisco for RIMS, a risk management conference, and got involved with Green Fund, a student group that works to make changes on campus in the name of sustainability.

“There was always a lot of focus on service at St. Joe’s and I think I’ve taken that with me,” says Chung. “Being so active and involved on campus will definitely help me professionally.”

That’s another thing Chung and Horgan agree on — there are countless opportunities to get involved in enriching and professional experiences at Saint Joseph’s, but students can only get out what they put in.

“No one out there does it as well as St. Joe’s. I know that. In a sea of applications, I know that the people at St. Joe’s, who have these incredible contacts in the industry, are making sure Maguire Academy students don’t get lost in a pile,” notes Horgan. “The table is totally set for these kids, in that sense. But it’s students like Serena who take the initiative to sit down and have conversations about their future — those are the students who really squeeze the value out of this education.

Students like Serena who take the initiative to sit down and have conversations about their future ... are the students who really squeeze the value out of [an SJU] education.

Still in the early stages of her career at Zurich, Chung is completing the trainee program and getting to know her peers. Soon, they will convene for a conference at Zurich headquarters in Illinois.

As for Horgan? He hopes to meet up with Serena again soon on one of his trips to Zurich’s New York offices — he is eager to keep up their conversation about her future and stay in touch.

“When I funded this scholarship, it wasn’t just to cut a check,” says Horgan. “I wanted to take a vested interest in the future of these students and bring the Maguire Academy program to life in the insurance industry. So, even as an alum, St. Joe's is giving me this opportunity to engage, but it’s my responsibility to reciprocate and see how I can support students like Serena.”

Horgan looks forward to meeting the future winners of his scholarship and helping them get their own leg up in the insurance industry. 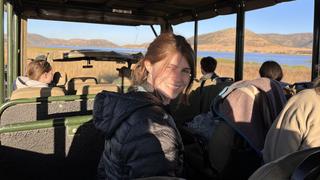 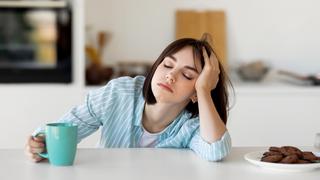 Novel sleep research conducted by recent alumna Lizzie Wash ’22 has inspired a new grant application with her mentor, Jennifer Tudor, PhD, associate professor of biology. Wash is now in her first year of a PhD program at the University of Minnesota. 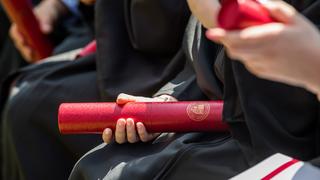