Allison Saile ’21 has worked at three different companies as part of St. Joe’s co-op program, gaining 20 months of work experience prior to her graduation.

When Allison Saile ’21 knows what she wants, she goes for it.

When she knew attending a school closer to where she grew up in Bucks County was a better fit for her, she transferred to Saint Joseph’s University from an out-of-state college. When she knew a business degree would better match her interests and talents, she changed her major from sociology, crime and justice to food marketing when she came to St. Joe’s. And when she knew she wanted to work for Kellogg’s as part of the University’s co-op program, she reached out to Kellogg’s to apply for a job.

St. Joe’s Cooperative Education Program gives students the opportunity to work full time in two or more paid work experiences — one full year of paid job experience — while still in college. Saile is part of the Academy of Food Marketing Co-op Program. She joined as part of the five-year program (now offered as a four-year program), working full time during the day, while taking two or three classes at night.

“In the new four-year program, students do not have to take a class during their co-op semesters,” explains Mimi Null, director of the Food Marketing Co-op Program. “Instead, they make up a full semester during an eight-week summer session where they’d take five courses.” Because of this, the Food Marketing Co-Op Program is very competitive. “Students have to apply for the program, and have to have a certain GPA to be accepted,” Null says.

As a food marketing major, Saile has had three co-ops during her time at the University: Johnson & Johnson, Dietz & Watson and Kellogg’s. Kellogg’s was her favorite.

“I actually reached out to Kellogg’s before they even joined (St. Joe’s) co-op program,” she says.

Saile was hired at Kellogg’s during her fifth year at St. Joe’s. Although her experience with them was entirely virtual because of the pandemic, she says she loved working with the multinational food manufacturer. One of her projects included running a coronavirus tracker for sales at ShopRite in store and on ShopRite From Home, where she compared sales during the pandemic to sales the previous year. She also designed a cereal snacking planogram (a blueprint for how products are displayed in different aisles) for Southeastern Grocers, a grocery chain in Florida.

“I designed one from scratch using images from Kellogg’s database,” she explains. “I had to get all the sizing information and put the products in where they would fit. That was really cool because I was an intern and they trusted me to do this whole big project.”

“You know what it’s like to be in a work environment. You know how to build those relationships, both one-on-one and in meetings.”

When Kellogg’s and Little Debbie partnered up to come out with a new oatmeal cream pie cereal, Saile helped pull data to support the project.

“[Little Debbie was] nervous that they weren’t going to be able to sell to the northeastern grocers like Wegmans,” says Saile, referring to the regional popularity of Tastykake and Entenmann’s. “So I was able to pull data in to support Little Debbie, showing that they actually have seven of the top 10 [selling] items in the northeast. With that data, we were able to send it to major retailers like Wegmans, ShopRite and Weis.”

Several weeks after her co-op ended, Saile was in Giant and saw the oatmeal cream pie cereal on the shelves.

Through the co-op program, Saile has found her niche working with data. Her first co-op at Johnson & Johnson during her sophomore year was also data-focused.

As a member of the customer strategy team Saile worked on selling product displays to big-name retailers like Target, Walmart, CVS and Walgreens. “I got to work on a bunch of new product innovations, and I got to work on one of their websites for RoC skincare.” She also helped size labels for a whole line of Aveeno products, and sent samples to retailers. “About four months after my co-op ended, I was in Target and I saw my exact label on the bottle and I think I started crying. I was pretty cool.”

Saile also had a co-op at Dietz & Watson during her sophomore year, managing the company’s social media, photo shoots and events. It was fun, she says, but she prefers the data-driven work where she can learn something new.

“I like when the things I do are backed with data,” she says. Once she graduates, she hopes to work as a data analyst for a large consumer packaged goods company where she can advance.

Because of the co-op program, Saile is graduating with 20 months of job experience. “You know what it’s like to be in a work environment,” she says. “You know how to build those relationships, both one-on-one and in meetings.” She also appreciates the opportunity to have worked with at least 10 different databases that she probably wouldn’t have interacted with outside the co-op program. “It just makes you stick out a lot more [to potential employers].” 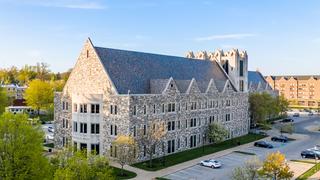 Connecting Students and Alumni Through the Dean’s Leadership Mentorship Program 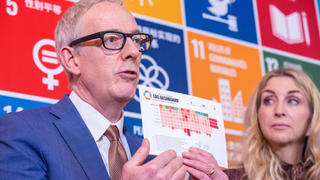 The funds will be used to further the platform’s goal for global business schools to share their best practice impacts on the United Nations Sustainable Development Goals (SDGs) and positively transform business education. 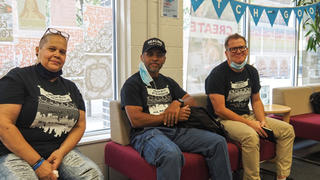 Mike Lyons, Ph.D., chair and associate professor of communication and media studies, and his students produced “On Both Sides,” a multimedia project featuring interviews with people who have lost loved ones to murder and incarceration for life. Lyons started the project with the Coalition to Abolish Death by Incarceration, a grassroots organization fighting to change harsh sentencing laws in Pennsylvania.