This semester, students in the course Multidisciplinary Inquiry: Nature studied the history of ideas about nature, connecting historic concepts to the modern world through the lens of climate change.

What do vinyl records, chicken nuggets, dogs and tequila have in common? They’re all related to climate change and the topics of students’ final presentations in the course Multidisciplinary Inquiry: Nature, taught by Christine Flanagan, MFA, professor in the Department of English, Writing and Journalism.

Over the last four months, Saint Joseph’s students who were enrolled in the course explored the history of ideas about nature, from ancient civilizations and the Book of Genesis, to the Scientific Revolution and the works of Galileo, Copernicus and Darwin. The idea behind the course is not only to understand how cultures think about and communicate their ideas about nature, but to also connect those ideas to the modern world.

“This semester, I wanted students to focus on climate change. I’m really struck by how difficult it is to teach and talk about, which is one of the reasons I assigned this topic for their final presentation,” says Flanagan. “How do we approach the wide range of topics that are under the big umbrella of climate change? How do we communicate those ideas and engage people?”

How do we approach the wide range of topics that are under the big umbrella of climate change? How do we communicate those ideas and engage people?

Students were asked to present on unusual ways to explore and understand climate change, tying their work back to what they had learned over the semester; the first- and second-year students did not disappoint.

One group presented on climate change’s effects on their canine companions, even bringing their four-legged friends to class to demonstrate the ways in which pet owners can keep their pets entertained and safe as the Earth’s temperature rises.

“One of the biggest surface areas on our dogs’ paws is their paw pads,” said Gianna Mingo ’22 ’26 (DrOT). “While dogs are genetically designed to withstand harsh environmental conditions, they are not immune to the adverse effects of overly hot or cold surfaces that are caused by global warming,” she said, alluding to an earlier statistic the group had shared that extreme temperatures could rise as high as 125 degrees by the 2050s.

Another group reported on how chicken — or more specifically, chicken nuggets — is a major contributor to climate change due to the greenhouse gasses emitted from chicken farming and broiler production.

One recommendation the group proposed to lessen one’s impact on climate change was to switch to a plant-based diet.

“While switching to chicken products from meats like beef or lamb does produce less greenhouse emissions, it’s not the best alternative when compared to plant-based products,” said Josh Yang ’22 ’25 (DPT), referencing statistics of greenhouse gasses emitted during food production.

While switching to chicken products from meats like beef or lamb does produce less greenhouse emissions, it’s not the best alternative when compared to plant-based products.

Other groups researched vinyl records and the dangers of the materials used in their production on the environment, and how agave plants and tequila production are threatened by global warming.

Though topics varied greatly from group to group, Flanagan emphasizes the importance of students’ ability to communicate these wide-ranging ideas to their peers — many of whom are enrolled in health science programs.

“Instead of just teaching students dates and asking them to regurgitate them, instead of just teaching history, you can teach the history of ideas as a series of dominoes where one event impacts the next,” she says. “It’s about understanding influence and causal action, and that encompasses history, literature, science and communication. What is science if you can’t communicate it?”

This spring, Flanagan will teach two more exciting courses: Creativity, a course that investigates what creativity is and how it can be learned, and Narrative Medicine, which teaches physicians and healthcare providers “the story of a life” and how training beyond the patient chart can inform healthcare. 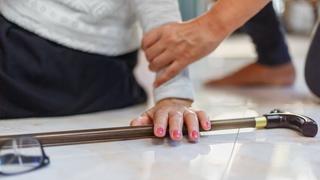 Faculty and students in Saint Joseph’s Department of Physical Therapy are working on research to help mitigate the occurrence of trips and falls, especially in the elderly. 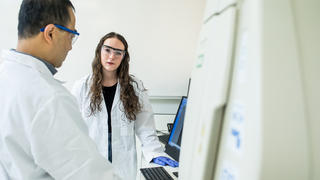 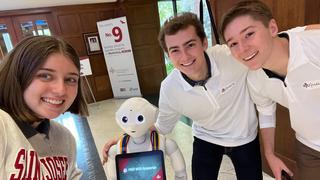