Striving to Do Better: How Zach Michon Set Records on the Track and in the Classroom

Zach Michon ’20 ’22 (M.H.A.) finishes his college running career one of the most decorated athletes of all-time for St. Joe’s and is eager to help others with his health care education.

At the 2020 Atlantic 10 Indoor Track and Field Championships, Zach Michon ’20 ’22 (M.H.A.) pulled off what very few college athletes have — doubling back in races just hours apart and winning gold in both championship events.

Lining up for the mile, Michon approached the race without thinking about his second event. “You want to leave it all out there,” he says. “And then you just have to recover between these races, and you refocus, and get back on the line and you do it all again.”

Simple instructions, but it took Michon years of training to complete such a feat.

Michon is one of the most decorated student-athletes in Saint Joseph’s University history. He’s an eight-time Atlantic 10 All-Conference selection and six-time Atlantic 10 individual champion. But for him, competing as a runner is not about the hardware or accolades. From the start, running has constantly been about working to push himself to the next level.

“I was always hungry to keep making myself better,” says Michon. “There was something nice about the work you put in and being able to see that pay off.”

As a child, Michon dabbled in many sports, from basketball to baseball to soccer. But at age 12, he experienced a setback that put a halt to his typical sports-filled days. Michon was diagnosed with a benign tumor in his knee. He underwent a successful surgery at the Children's Hospital of Philadelphia to remove the tumor.

Following the procedure, Michon wore a full leg cast from his ankle to his hip for three months. Then he began his road back to sports — going to physical therapy to regain mobility and muscle strength in his leg.

Recovering from that surgery gave him a sense of appreciation and gratitude. He also felt like he had been given an opportunity that he didn't want to waste.

While he enjoyed many sports as a kid, it was in track and cross country that Michon started to find his legs and with it, a sense of purpose. During middle school track, Michon got his first taste of success and, after a breakout freshman year in high school, he made it one of his goals to run DI at college. St. Joe’s became his top choice because of the sense of family he experienced when he came to campus as a potential recruit, Michon says.

At St. Joe’s, Michon’s constant desire to improve was palpable by his teammates and coaches. He committed himself in every aspect of the sport — from increased mileage, to core work, to diet and nutrition, says men’s cross country and track Head Coach Mike Glavin.

“Zach Michon was the king of that level of investment,” Glavin says. “When he arrived at the next level of achievement, he kind of assessed what got him there, talked with me about what comes next and started the process all over again.”

Led by a spark from his own childhood experiences with doctors and physical therapists, and a desire to help others, Michon completed his bachelor degree in interdisciplinary health services and is now working towards his masters in health administration.

“I feel like there are tons of opportunities in the field of health care, and there are a lot of opportunities to make a real impact in people's lives,” Michon says. “That's kind of what I've kept in mind when I've been thinking about my future career.”

During Michon’s freshman year, he struggled academically, but every semester as his times on the track dropped, his GPA went up. In 2021, Michon was named to the Atlantic 10 Outdoor Track and Field All-Academic Team and received United States Track and Field and Cross Country Association Division I All-Academic individual honors.

Michon hopes his time as a student-athlete will help him as he enters the workforce.

“Competitiveness is something I'm definitely going to take away from my athletic career and be able to apply in other places in my life, because it becomes part of who you are,” Michon says. “You always strive to do better.” 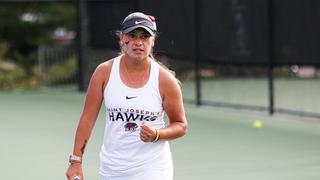 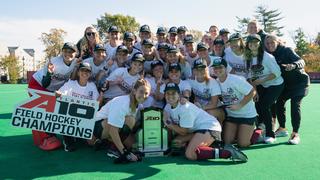 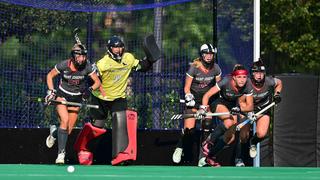