Students involved with the “McKenna Project” – a research investigation into Associate Justice of the Supreme Court Joseph McKenna – found evidence that he was an alumnus of the University, and the third Catholic Justice. 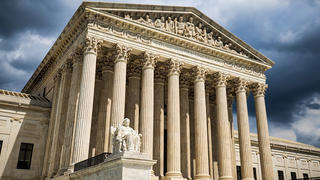 On January 26, 1898, Joseph McKenna joined the Supreme Court of the United States. Born in Philadelphia, he was also the former attorney general, a member of all three branches of government and a Catholic. He was also – supposedly – a graduate of Saint Joseph’s University.

Proving this is just one of the many goals of the McKenna Project, a faculty-student research collaboration led by Susan Liebell, Ph.D., professor of political science.

“I’d heard the name McKenna before,” says Liebell. “Every year during graduation, it’s mentioned that Joseph McKenna was a Supreme Court Justice and that he’d gone to St. Joe’s. There’s the McKenna Law Society, and I wondered why it was called that. Then I realized there was a Supreme Court Justice who went to St. Joe’s … but there was no trace of him. There were no classrooms named after him, no statues and no paintings.”

When she realized how long McKenna had spent on the Supreme Court – from 1898-1925 – and when she saw just how many opinions he’d written as a justice, Liebell knew this would be an important project for the University.

She put a call to students on social media and via email to apply for a research class, Political Science 470 - Research in the Discipline, an independent study project that focuses on a particular topic of interest. The five students who were accepted into this class range in majors, from political science to international business to communication studies. The goal was to learn more about McKenna and his connection to St. Joe’s and to create a permanent online database for others who may be looking at this period in the Supreme Court.

“I wanted the class to be able to create a concrete product, like a website that students would be able to add to their resumes,” explains Liebell, discussing how she came up with the course concept. “Students would gain research skills, both traditional but also in digital humanities. I was hoping that as the students collected resources, they’d also be able to launch their own smaller publications.” And the University would end up with a permanent archive.

“I realized there was a Supreme Court Justice who went to St. Joe’s … but there was no trace of him.”

Cassidy Atchison ’21, a political science major, is researching McKenna’s time as the attorney general during the McKinley Administration, as well as the Supreme Court cases involving anti-Asian-American racism.

“I’d taken [Liebell’s] Race, Gender and the Law class, and that really drew me into constitutional law,” says Atchison. “I’m working on consolidating cases of anti-Asian-American racism in the Supreme Court. I’m also working with the other students to build a Wikipedia page for McKenna because there are a lot of things lacking on his page currently.”

Part of the students’ research has included reaching out to other libraries, from Drexel to Rutgers to Columbia to the Library of Congress.

Other students are focusing on different aspects of McKenna’s life. “One student is obsessed with finding out more about McKenna’s wife,” says Liebell. “Why wasn’t she mentioned? Who was she?” Another element of fascination is the political parties, and what they looked like at the turn of the 20th century.

According to Liebell, McKenna was both an interesting and confusing figure. “We’ve learned some interesting yet conflicting facts, like he seemed to be pro-Native American water rights, but displayed anti-Asian-American sentiments,” says Liebell. “And there’s a big question mark around his views on women. The things he wrote in Court are actually a little more progressive than they sound, for the time he was living in. He wanted to create better working hours for women. He’s complicated.”

Over the weekend, a huge discovery was made at St. Joe’s library: Lesley Carey, a library technician, found a 1901 University directory that lists McKenna as a Saint Joseph’s alum, with his address listed as the Supreme Court.

“This research is moving fast,” says Liebell. “It was very exciting to get this document from the archivist at the library.”