As the inaugural director of Saint Joseph’s Center for Addiction and Recovery Education, Stephen Forzato is bringing a passion for education and combining it with a track record of addressing addiction issues throughout Pennsylvania. 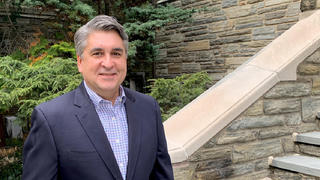 Fresh out of college, Stephen J. Forzato was working his very first homicide crime scene when he made a promise to himself that he has carried through to this day.

“The detective that found the fingerprints on the door frame and eventually solved the case kept his techniques secret from others,” Forzato says. “When I asked him how he found those fingerprints, he basically said, ‘Get away from me, kid…I need job security.’ I vowed to myself that I wouldn’t be like that in my career.”

Throughout Forzato’s long and successful career in law enforcement, he took pride in teaching and mentoring his colleagues. As the inaugural Director of Saint Joseph’s new Center for Addiction and Recovery Education (CARE), he’s bringing that passion to academia and combining it with a track record of investigating drug traffickers and helping those suffering with addiction throughout Pennsylvania.

CARE was established in November to extend the cutting-edge work that the Institute for Clinical Bioethics and its director, Peter A. Clark, S.J., Ph.D., the John McShain Chair in Ethics, have done to address addiction issues at a time when they are affecting the lives of almost half of all Americans. CARE will bring interdisciplinary scholars and practitioners together to study addiction and promote recovery through education, research, policy and community engagement.

“This issue is very personal to me; I’ve seen first-hand through my previous law enforcement work the devastation that addiction brings to individuals, families and communities,” Forzato said in November. “A human-first, collaborative approach is the most effective approach. We will not only foster meaningful dialogue in the community, but will also create action by engaging diverse stakeholders.”

Forzato, who received his master’s in criminal justice, intelligence and analysis from Saint Joseph’s and bachelor’s in administration of justice from Penn State, began his career in law enforcement working for the crime scene unit at the Montgomery County District Attorney’s office. The job taught him the ropes and he enjoyed the two years he spent there. But something in the back of his mind was gnawing at him — the narcotics unit down the hallway from his office.

It was the mid-1980s, when the flashy police drama Miami Vice topped the TV charts. The Montgomery County narcotics unit fit the formula to a T: Big beards, long hair, flashy cars, and lots and lots of action … what more could a 21-year-old want in a job?

But for Forzato, it was about something more: He wanted a job with purpose.

“There was one case I got called out to while working crime scenes, during the mid-1980s, an 18-year-old kid who died. I walked into his bedroom to photograph and collect evidence. Just above the lifeless body of this young man were cocaine bags piled up on his dresser, empty bags he was in the middle of filling, and a huge pile of cocaine,” Forzato says. “He was laying there on the floor, overdosed on the drugs he was packaging for sale. I thought to myself, I know he’s a drug dealer, but he didn’t deserve to die like this. That’s what really fueled my interest in getting into drug enforcement.”

During his first few years in narcotics, Forzato went undercover purchasing tiny vials of crack cocaine or glassine bags of heroin. However, these smaller targets didn’t bring the results Forzato hoped for. “My impact was very minimal. In my undercover roles, I was meeting only small fish. It was hard to get introduced to the big ones,” he explains.

That’s why Forzato added wiretapping to his skillset. “Wiretapping gives you a bird’s eye view of the drug organizations, from buyer to dealer to supplier. I developed the knack for identifying more important dealers by analyzing call patterns and deciphering their coded conversations. Sometimes the most important clue to correctly identify organizational leadership was through assessing how others spoke to them. Spinning to wiretap the phones of these previously unknown traffickers enabled the dismantling of entire drug organizations, with some having tentacles into foreign countries.”

For Forzato, these larger hits became more than just getting drugs off the street. He developed a passion for helping communities suffering from serious addiction issues. “While pursuing dealers, and especially those profiteers who did not suffer from substance use disorder, I came across people that had serious drug addictions. I learned from them about their disease while some other cops thought of them as junkies or snitches,” Forzato says. “I just wasn’t raised like that. I built trust. I ate dinner with them at their own tables. I knew their families, their kids, their hopes, their dreams,” Forzato recalls.

As Forzato rose throughout the ranks, his commitment to treating this population with respect and dignity never left him. As a lieutenant, Forzato insisted his team did the same.

However, eventually Forzato realized there was only so much law enforcement could do alone. “There was a time when I thought I had made a big impact. We took an entire meth organization down. When I asked my informant how we did — if there was any meth out there — she told us it was impossible to find. I thought I had won the war. But one week later, meth was back. Someone had taken the place of those we arrested.”

While Forzato was having dinner with then-Montgomery County Commissioner Josh Shapiro, they discussed being in the middle of a public health crisis — one that would require public health and law enforcement work together. “He came up with the idea that this is a crisis that we can’t arrest our way out of, and that really resonated with me.”

When Shapiro was elected Attorney General of Pennsylvania in 2016, he asked Forzato to come on board as his Deputy Chief of Statewide Drug Initiatives. The first issue Forzato tackled in his new role was addressing law enforcement officers on how to interact with people with substance use disorders.

"Opioids are the strongest drugs on the face of the earth. Even the strongest-willed will find it difficult [to quit.]"

“Before, police would encounter people with substance use disorders and all they knew to do was to seek to arrest them. If someone had even a small amount of drugs, they were put in handcuffs and charged. I went around Pennsylvania and talked with police chiefs and officers. I said, ‘How about we address the underlying issue that these are people who are suffering from the disease of substance use disorder?’” Forzato says. “They’re not junkies; they’re suffering from a disease. Officials in public health had been saying that for a while, but traditionally law enforcement has struggled to work well with public health.”

Forzato relied on his law enforcement background to gain trust with officers he was tasked with retraining. “I was one of them. I had 33 years of law enforcement experience. I am proud of the work I’ve done and respect the courage of my colleagues. I was aggressive, successful, and led a good team — but I was telling them this is real. If you treat them like criminals, you’ll never solve the problem.”

When Saint Joseph’s job posting for the position of director of CARE lured him to consider transitioning to academia, he left his position with the Attorney General. In getting the new center up and running, Forzato has his plate full — a challenge that he welcomes with open arms. “There is so much within this space to be done, so many things needing to be addressed,” Forzato says. “My first priority is to build a program capable of delivering help and support to our SJU family. Alumni, students, parents, faculty and staff are not immune from being affected by substance use disorder.”

Forzato wasn’t on campus long before he recognized just how much addiction and recovery education can mean to the SJU community. Though CARE’s mission is also focused on the community beyond Hawk Hill, after speaking with a Saint Joseph’s employee who recently lost a loved one to an overdose, Forzato made it one of his first goals to provide education and training to SJU public safety officers.

“Opioids are the most powerful and addictive drugs on the face of the earth. Even the strongest-willed of us would find it difficult to stop using them, once dependence sets in,” he says. “Before I go out to the community, I need to make sure we’re taking care of things here at home, and that starts with training on signs of drug use and addiction, the dangers of it, and how to get help. Substance use disorder is a disease that is treatable.”

Some of the initiatives Forzato hopes to bring to campus include participating in the drug take-back program, supporting collegiate recovery, and bringing the overdose-fighting drug Narcan to campus. He recently completed training with the University’s public safety force on using the treatment. “Narcan saves lives,” Forzato says.

Forzato will also work directly with SJU’s athletic programs. “In my previous career I met too many who suffered injuries while participating in school sports and developed addictions to opioids. [Athletes are] particularly vulnerable to reliance on pain killers. Injuries sometimes require major surgeries.”

Forzato plans on sharing any successes that CARE has with other universities across the country to help them address substance use disorder including alcoholism on their own campuses. “Shortly after the training of Saint Joseph’s public safety officers, a local university contacted CARE asking for tips on Naloxone training for their staff,” Forzato says. “This public health crisis requires collaboration and partnership, and not competition. So glad to be helpful.”

Forzato is confident that by Saint Joseph’s addressing addiction, it will open the door to new partnerships between CARE and alumni, as well as with students, faculty, and experts in the prevention, treatment, and recovery industry. “Substance use disorder including alcoholism afflicts vast numbers of people in American society. SJU families are not immune,” Forzato says. “Giving a voice to those silenced by the disease is something CARE is prepared to do.”