How a Science-Backed Tool Leads to Better Sleep for Babies

Jodi Mindell, Ph.D., professor of psychology, has developed a tool that she finds helps parents develop more effective nighttime routines for their babies, and leads to a better night’s sleep. 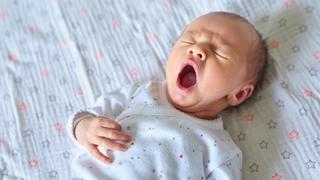 Sleep, or the lack of it, is top of mind for any parent of a baby or a toddler. In recent years, a number of apps and other digital tools have become available that purport to help parents more easily track their child’s sleep patterns.

Saint Joseph’s University’s Jodi Mindell, Ph.D., a professor of psychology, developed a science-backed sleep intervention for infants. In the paper “Effectiveness of an mHealth Intervention for Infant Sleep Disturbances,” Mindell tested the intervention in the real world via a smartphone app created in partnership with Johnson & Johnson. In as few as four days, parents who used the app reported better sleep outcomes for their infants – and as any parent knows, better sleep for baby means more sleep for the entire household.

Mindell, a clinical psychologist, is also associate director of the Sleep Center at the Children’s Hospital of Pennsylvania and has written several books on pediatric sleep. Her research also focuses on studying children’s sleep patterns in different parts of the world and among different cultures. She is chair of the advisory board of the Pediatric Sleep Council, which distributes free information and public education about baby and child sleep.

Among the interventions she has developed is the customized sleep profile (CSP), an algorithm-based tool that has caregivers complete a short questionnaire and, based on their responses, offers customized advice about bedtime, bedtime routines, parental response when the child wakes up during the night, sleep duration, sleep space and overall sleep health.

Mindell previously did a randomized control trial study using the CSP, where half of all participants were provided with the intervention and half were part of a control group.

“We found [the CSP] to be highly effective,” Mindell says of the results of that study. “Everybody in the original study had to have a baby who had a sleep problem. With this more recent study, we took a real-world sample of parents who were using the Johnson’s Bedtime app with the CSP built in.”

The recent study involved 404 families with infants ages 6 to 12 months, a range chosen because children have similar sleep needs during that time. Using the Johnson’s Bedtime app, each family was asked to fill out an initial questionnaire and was given customized advice based on their answer. Between 4 to 28 days later, families chose to come back and fill out the questionnaire again.

One of the questions asked of parents was whether they considered their child to be a problem sleeper, which allowed researchers to break down the results by families who struggled with sleep for their baby and those for whom it wasn’t as much of a challenge. They found that sleep onset latency, or how long it takes someone to go to sleep, improved for both groups, as did total nighttime sleep and total 24-hour sleep time, with greater improvements in the latter two for the problem sleeper group.

Parents of problem sleepers reported earlier bedtimes, longer continuous stretches of sleep and a decrease in the number and length of time that their child woke up in the middle of the night. All of the parents reported that their bedtime routines became easier and that they felt greater confidence as a result of using the tool.

“These results were incredibly positive. This intervention tool, which is free and publicly available to all parents, provides recommendations that can lead to improvements in sleep for all children, including those with and without a sleep problem,” Mindell says, noting that one next step for the research is examining the tool’s effectiveness in children with special circumstances, such as multiples or children with developmental delays. “This is not going to solve every child’s sleep problem, but it can lead to improvements for many.”

Mindell notes that having an evidence-based, empirically supported, freely available tool for families struggling with infant sleep is especially important because many families struggle to access in-person services for pediatric sleep issues, both due to cost and the limited number of providers. She adds that pediatricians are also often not educated on treatments for sleep issues the way they are in identifying significant health concerns or developmental delays.

“We want parents and practitioners, when they go to get advice, to look at what’s behind it, who the developers are, who the creators are, and to make sure they have access to information that is credible and effective,” Mindell says.

Hear more from Mindell at the Pediatric Sleep Council’s Baby Sleep Day on Mar 1, where sleep experts will be answering parents’ questions live on Facebook.