Looking Back on Pope Francis’ Visit to Hawk Hill

Daniel Joyce, S.J. ’88, executive director of mission programs, and Katie Oxx, Ph.D., associate professor of theology and religious studies, reflect on the Pope’s historic trip to Philadelphia in 2015 and their lasting impressions of the experience. 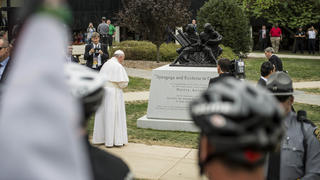 Five years ago, on Sept. 27, 2015, Pope Francis made a surprise visit to Hawk Hill during his trip to Philadelphia. During his time on campus, he blessed the Synagoga and Ecclesia in Our Time sculpture located in front of the Chapel of Saint Joseph, which celebrates Catholics engaging with and learning about non-Christian traditions. We spoke with Daniel Joyce, S.J. ’88, executive director of mission programs, and Katie Oxx, Ph.D., associate professor of theology and religious studies, and asked them to reflect on the importance of the Pope’s visit then, and how it still resonates today.

Five years later, what is the significance of the Pope’s visit?

Daniel Joyce, S.J.: When he came to campus, Pope Francis blessed the Synagoga and Ecclesia in Our Time sculpture on our campus – a sculpture that depicts Jews and Christians sharing and learning from each other’s texts. St. Joe’s culture encourages interfaith dialogues and communication. The Pope’s actions that day were statements: He wanted to offer recognition for what we do here, for encouraging interfaith dialogues.

Katie Oxx, Ph.D.: The significance of the Pope’s visit to St. Joe’s in 2015 is a timely and poignant reminder of his message then and since. It’s especially important now for us to remember that Pope Francis came here to bless Synagoga and Ecclesia in Our Time, which commemorated the 50th anniversary of Nostra Aetate, the Vatican II document which transformed the relationship between Jews and Catholics, and inspired the founding of the Institute for Jewish-Catholic Relations here at St. Joe’s.

Joyce: Saint Joseph’s requires all students take a course in Catholicism and [one on a] a non-Christian religion as a foundational part of our Jesuit education. Our theology department uses [the Pope’s] writing in its courses, and our science department studies his letter on climate change.

How do you think his visit impacted students?

Joyce: When he became Pope in 2013, he was very popular with young people. Lots of kids visited his social media accounts. Our students in particular always resonated with his message of putting faith into action. His visit is now a living lesson for us at St. Joe’s. Students today tell the story of when he visited, and explain the importance of the Synagoga and Ecclesia sculpture in front of our chapel. His visit comes up during every campus tour, because every tour guide stops at the sculpture. He is now part of our campus’s culture.

Oxx: Students were exhilarated, and the visit has become a milestone in our institutional memory. I was talking to a group of first-year students in the spring who were hoping that during their time here, he’ll come back!

“The Pope’s actions that day were statements: He wanted to offer recognition for what we do here, for encouraging interfaith dialogues.”

If the Pope addressed the campus community today, what do you think he’d say?

Joyce: Pope Francis would ask us today, as he did five years ago, to stand with the most marginal and the under-respected, who have been negatively impacted by the pandemic, the global economic crisis, racial inequity and who are the hardest hit by climate change. These are constant themes in his speeches and writing. He often tells young people not to be afraid to put themselves out there, by way of words or actions. He emphasizes the idea of finding God in all things and experiences.

Oxx: If Pope Francis visited St. Joe's today, he would say exactly what he’s been saying: Violence and injustice against people of color, immigrants, Muslims, Jews, refugees, the LGBTQ community, and all of those who have been excluded from society or discriminated against cannot be propagated, supported or tolerated by Catholics. He’d say that access to health care is a basic human right and that economic and social systems built on individualism and exploitation must be transformed. He’d say nationalism, xenophobia, anti-Semitism, and racism are sins that violate the sacredness of human life and the dignity of every person. He'd remind us of the urgent need for solidarity in these trying times. 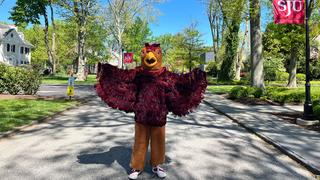 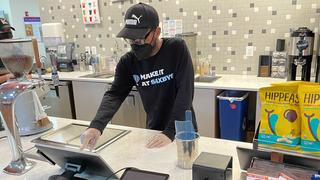 Kinney Center client Ira Tucker is the first neurodivergent individual to be hired at the University’s cafe location. 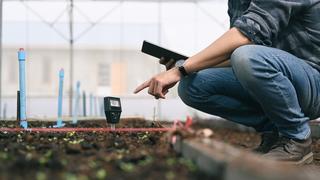 Raspberry Pi’s and Produce: Community Garden Increases Harvest with Help from the Society of Physics Students

Undergraduates in Saint Joseph’s Society of Physics Students are utilizing their programming and electronic skills to support human services organizations in the area by partnering with the University’s community garden.