The COVID-19 pandemic has upended the U.S. economy and its job market seems slow in making a “return to normal.” Saint Joseph’s expert faculty Laura Crispin, Ph.D. and Eric Patton, Ph.D. were able to tease out some of the larger issues facing the U.S. economy and how employers can start getting the country back to work this fall. 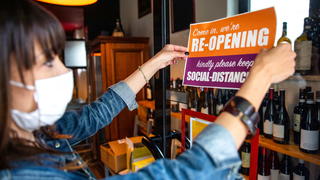 The COVID-19 pandemic has upended the general order the world once knew and, as vaccination rates rise and populations battle back the Delta variant, the job market is taking its time in “returning to normal,” with U.S. unemployment hovering above 5%.

The truth of it is, the U.S. is still smack dab in the middle of a pandemic that may forever change the way we work. As that story unfolds, Saint Joseph’s expert faculty, Laura Crispin, Ph.D., associate professor of economics, and Eric Patton, Ph.D., associate professor of management, were able to tease out some of the larger issues facing the U.S. economy and how employers can start to get the country back to work this fall.

Labor shortages have been dominating the media’s coverage of the U.S. economy since last spring. Employers lost a large chunk of workers who were forced into retirement at the start of the pandemic and hundreds of thousands more were laid off when their employers closed during the shut down.

“Some of these workers were being let go from their second or third jobs. The pandemic gave them a chance to assess the risk they endured in those positions and figure out how to live without that paycheck,” notes Patton. “Maybe they’ve decided to take care of their grandchildren instead or cut back on something else to make up for the financial loss.”

To bounce back, big retailers like Amazon and Walmart are offering signing bonuses and other financial perks, virtually obliterating any Main Street business’s ability to attract workers.

"Employers need to rethink their wage structures," urges Crispin.  "If workers can make $11 per hour working at Target or $11 per hour at a day care center, which requires certifications and oversight, which one would most workers choose?"

Another monumental shift in the way some people work has been a drastic rise in remote work, which some employers are using as hiring incentives. While this option can’t be made available to all workers, it has become quite a convenience for the majority of office workers who are maximizing their work hours by eliminating commute time and leaning in to more flexible hours.

“It’s been incredible to see the shift we were able to make for those of us with office jobs,” remarks Patton. “Typically, if an entire organization was planning to switch to remote work, that plan would have been implemented over many  years. But within a matter of weeks, we were back to work even though our entire world had been shut down.”

Patton notes that a study out of McKinsey & Company showed a large majority of workers preferring to remain remote once the world returns to “business as usual.” But there are downsides to telecommuting. Employers are seeing record rates of burnout as work life and home life collide, and the facilities corporations spent billions of dollars to build are sitting vacant, leaving them to absorb incredible financial losses.

To manage this, companies like Apple and Google are disincentivizing remote work for their employees by offering perks like cash bonuses and stock options to staff who work on site. Without government support, smaller companies aren’t able to implement strategies like these.

“I think there's a case to be made for another round of government intervention,” argues Patton. “These smaller employers are going to need those funds to increase their payroll capacity.”

2. The Job Market is Mismatched.

The national unemployment rate shot up to 18% in March of 2020. While those rates have declined, the unemployment rate in the state of Pennsylvania is still hovering around 7%, which sits far above what most economists would consider normal. So why is it that everywhere we turn, employers seem desperate for workers?

According to Crispin, those seeking employment may be mismatched in experience for the 10 million jobs currently open in the United States.

“If someone has a Ph.D. in computer science, they don’t want to work at Chipotle,” Crispin sums up. “They’re looking for work that requires their expertise.”

This type of job mismatch is leading some members of the U.S. workforce to end job seeking all together. These workers are what’s known as “discouraged workers,” or workers who have virtually dropped out of the labor force, and are not counted in the national unemployment rate.

So as the unemployment rate normalizes, the labor force participation rate is still low, which is not sustainable for the majority of U.S. households or the overall economy.

“Participation rates have declined pretty significantly and that’s heavily affecting our workforce,” notes Crispin. “These people might be going back to school or taking care of their kids; they might also just be baking bread — who knows. But they are definitely not job seeking.”

A common narrative in the media is that unemployment benefits are higher than the wages some workers were receiving, making a return to the workforce seem insensible for them.

“There’s not a ton of evidence to back that up,” says Patton. “The truth is, the people who need jobs are always going to go back to work — $300 isn’t going to keep them home. But plans keep shifting and a lot of those jobs they left still haven’t come back. It’s a guessing game at this point as to when they can really rely on that employment.”

3. The Precarious Nature of Pandemic Childcare.

Perhaps the most multifaceted side effect of all is the remarkable way COVID-19 has wiped women out of the workforce.

The pandemic had a near-immediate effect on working mothers. This disparity came across as particularly stark with parents of kids under 10: The rate at which women in this group considered leaving the workforce was 10 percentage points higher than for men. And women in heterosexual dual-career couples who have children also reported larger increases in their time spent on household responsibilities since the pandemic began.

The school year is just beginning as COVID-19’s Delta variant is causing shocking surges in positive case rates across the globe, making child care continue to feel unreliable and a return to work for women seem just out of reach.

“Until we can get our children vaccinated, I don’t think anything will go back to the way it should be,” says Crispin. “Between day cares closing and schools constantly shifting back to virtual learning, there is no way for working mothers to predict how available they can be for work during the day while also taking care of their kids.”

Crispin recently submitted testimony on the current state of child care in the U.S. to the PA House Democratic Policy Committee in Harrisburg. In her testimony, she highlighted that, beginning in 2020, a severe child care shortage was triggered by permanent closures and major staffing vacancies at early education centers. Today, just getting children into a day care can put parents on a waitlist for months, if not years. With child care costing U.S. families an average of 31% of their household income, many women defaulted to their gendered roles of household caretaker.

“Women were either reducing their hours or leaving the labor market entirely,” says Crispin. “And, ultimately, this is going to slow our economic recovery quite drastically with lower productivity and a slow return to what we’re used to in terms of full employment.”

This long-term unemployment may make re-entry to the job market quite difficult for working mothers and could take the U.S. economy back in time when it comes to wage equality.

So how do we get mothers back to work? Studies show, it’s all about flexibility.

“Being able to set their own hours seems to be of the utmost importance to working mothers,” says Crispin. “Even more so than remote work. Being able to sign off and take care of your 5th grader’s Zoom school or leave the office to take your baby for his 6-month check up and then log back in around 8 p.m. after bedtime — that’s what is important to mothers right now.”

The story is still unfolding, of course, and there is no predicting how the nation will dig its economy out of the gaping hole caused by COVID-19. But a severe spotlight has been shown on the areas where the U.S. has, unfortunately, always been lacking: Working parents and small businesses have always needed government support and it’s high time policies were put in place to make these work-life choices a little less dire for its citizens.